The All- Electric 2021 Mustang Mach-E

Since its inception, the Ford Mustang has set the tone for power and performance. Inspiring other brands to create similar vehicles, the Mustang had developed a whole new class of automobiles to become known as the pony car. Over the next 55 years, the Ford Mustang improved on its original concept of performance, power, design, and innovation, to become one of the best-selling vehicles in the world. Looking toward the future, Ford considered how they could challenge themselves even further to deliver an even more improved Mustang model.

With technology at the forefront of automotive design and operation, Ford challenged their own innovative capability to create a Mustang that was not only tech-centered but also completely electric. Reinventing the classic Ford Mustang was something that required forward-thinking but it also had to embody the soul of the original Mustang model. This challenge was not taken lightly, because this new model had to be something worthy of wearing the pony logo. With all of these challenges in mind, Ford has created the 2021 Mustang Mach-E and the end result does not disappoint.

The 2021 Mustang Mach-E, the newest member of the Mustang lineup, was unveiled on November 17th, 2019. Thousands of anxious spectators tuned in online to learn more. At the end of the reveal, it was clear that the new Mach-E checked all the boxes that Mustang admirers look for.

Bayfield Ford is located in Barrie, Ontario, Canada. If you are located outside of Canada, please refer to our Manufacturer’s website for more information. 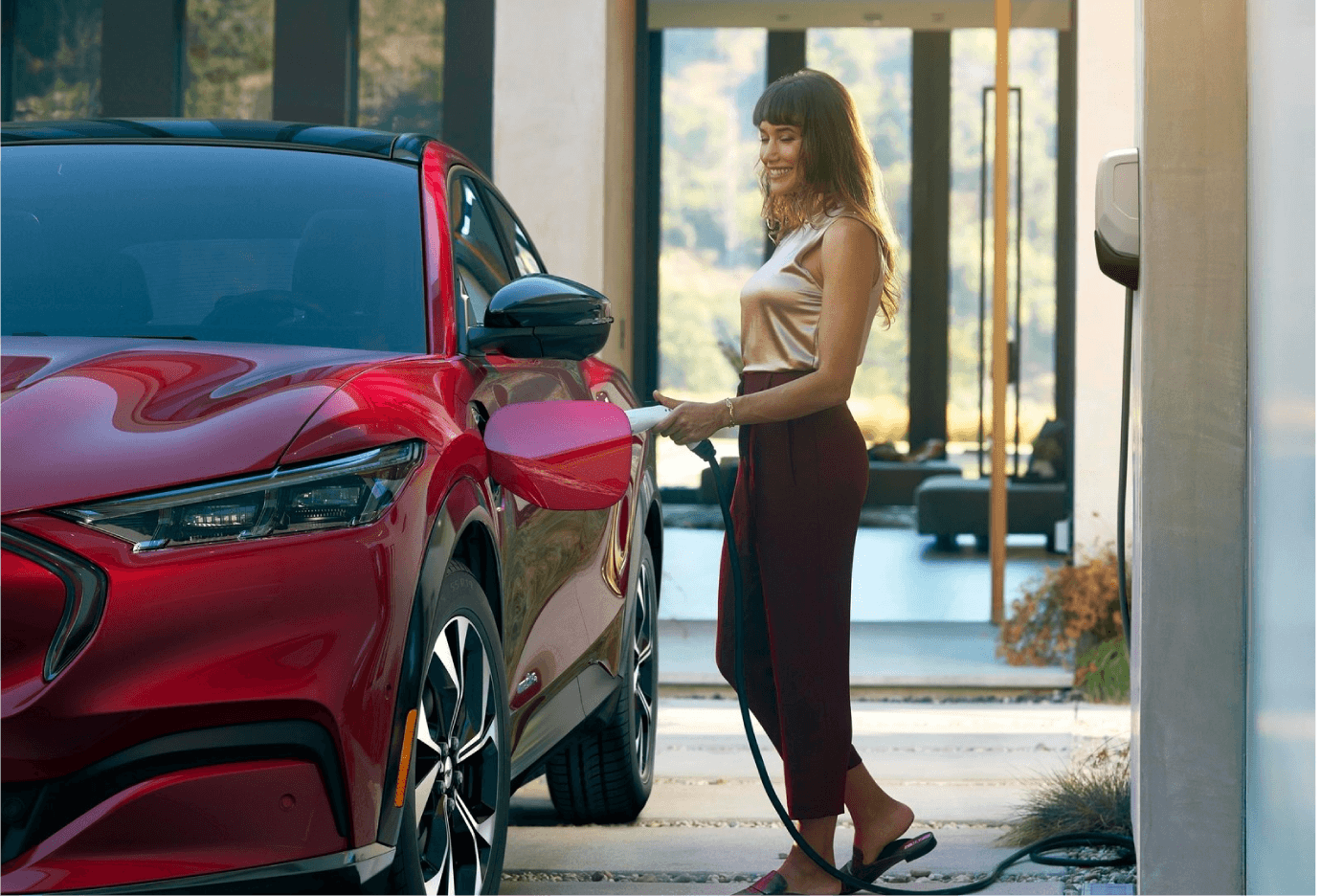 The Ford Mustang has always stood out for its capable power, so creating an electric model that met the same standard of performance was most important. Implementing an electric motor and battery pack begged the question of whether or not the Mach-E could deliver the same amount of power as the traditional Mustang. The answer is yes. The new Mach-E can accelerate from 0-60 km/h in under 3 seconds flat. This impressive fact is only outshone by the fact that is also drives like a Mustang. Best of all, the Mach-E can charge from 10-80% in 45 minutes on a DC fast charging station. And once fully charged, you can depend on an estimated 425 km of range. You won’t have to compromise power or distance in the all-new Mustang Mach-E. Charging is easy and convenient. You’ll receive a home charger with your Mustang Mach-E and you’ll be able to utilize thousands of charging stations available across Canada

While “what’s under the hood,” so to speak, is impressive, the innovation doesn’t stop there. The Mach-E’s interior is equipped with technology so unique, there is no other user experience like it. With the input of customer feedback, Ford has created a new interior system that connects seamlessly to you and your mobile device. The system operates by voice command and touch screens, featuring one singular knob in the center of the console. The system as a whole is modern, visually appealing, and most importantly, easy to use. The system communicates vehicle information to you and is operated completely by your smartphone. With the Ford Pass app, your smartphone is your vehicle key and the hub to receive all of your vehicle information. 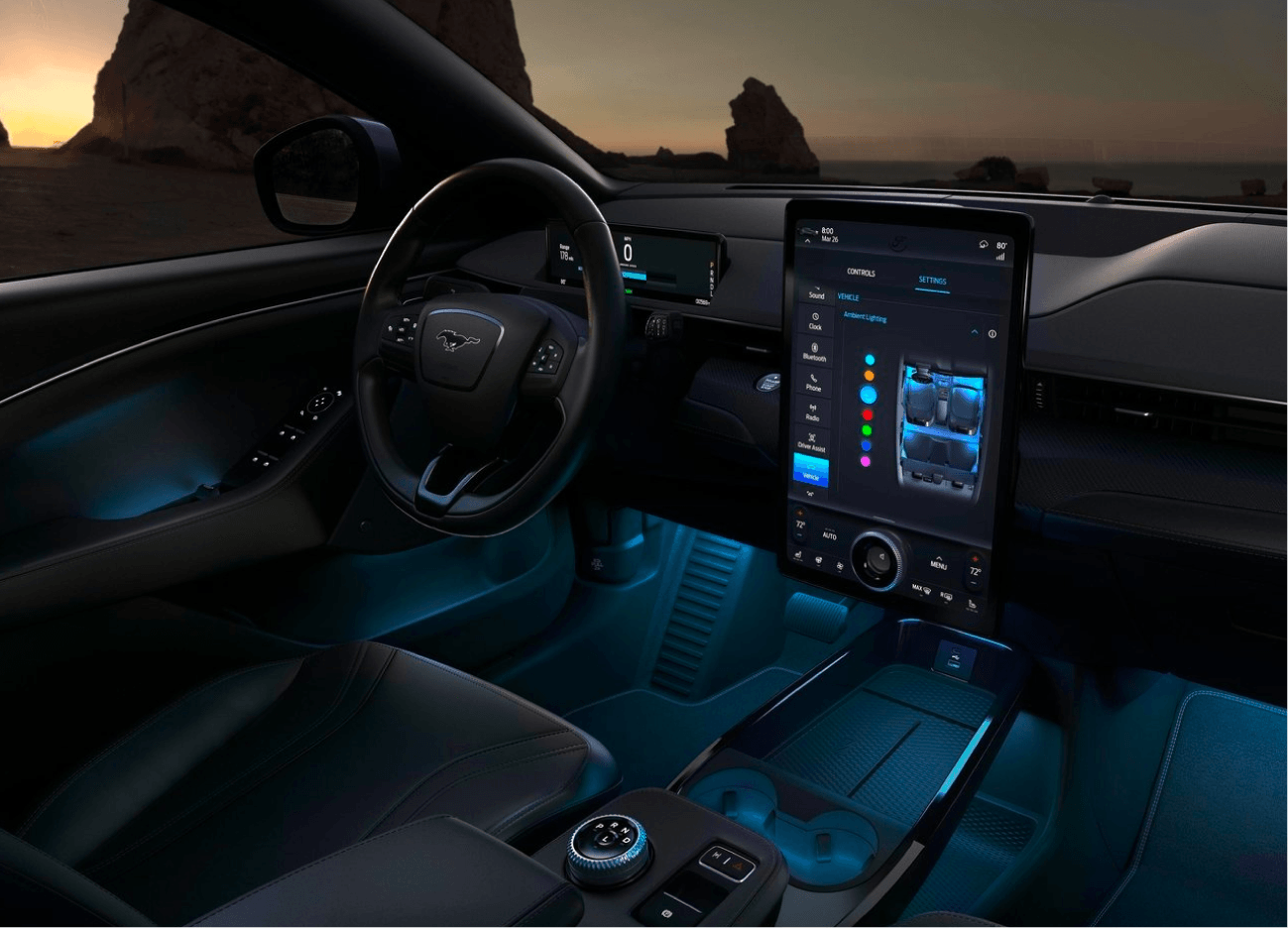 In the Mach-E, you can create a vehicle profile for each driver, pre-setting vehicle preferences, drive modes and maps. Navigation is standard in this model and is live, always providing you with the best routes to your destination. It even adds convenient charging stations along your route.

The Mach-E is also equipped with standard Ford Co-Pilot360 Technology. With this safety feature, you’ll feel confident in knowing that your Mustang is actively helping with lane keeping, reverse brake assist with rear sensors, rearview camera and more. The Mach-E is also equipped with pre-collision assist and automatic emergency braking. Co-Pilot360 detects forward collision with other vehicles and pedestrians. You’ll also be able to utilize adaptive cruise control and evasive steering assist. But the most exciting component about Co-Pilot360 is that all of these features are standard. Additional Co-Pilot360 features are also available in select Mach-E models. 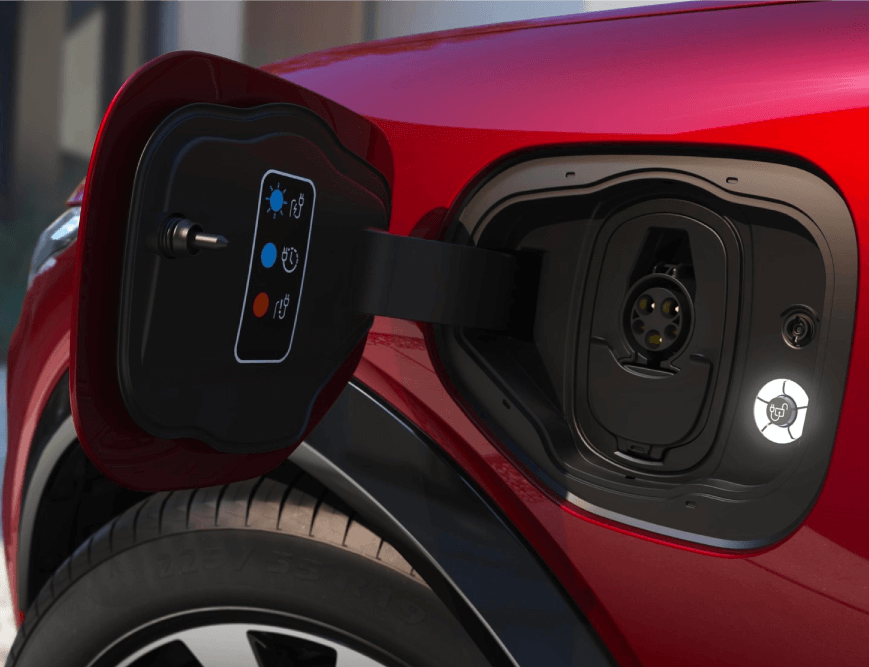 A light-up charge port is easy to locate in low-visibility conditions. 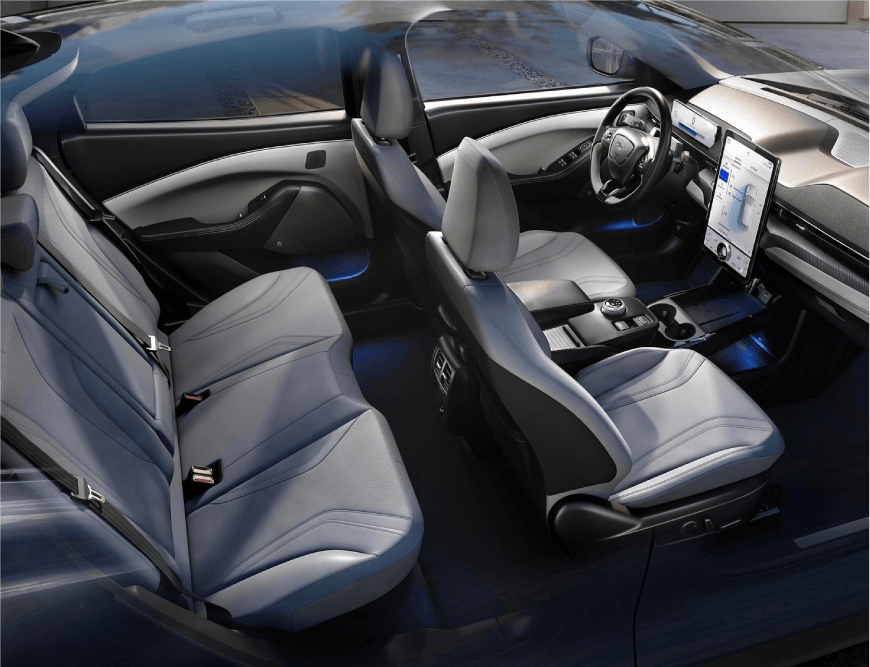 Sit back and relax. There’s plenty of legroom for everyone to enjoy the ride. 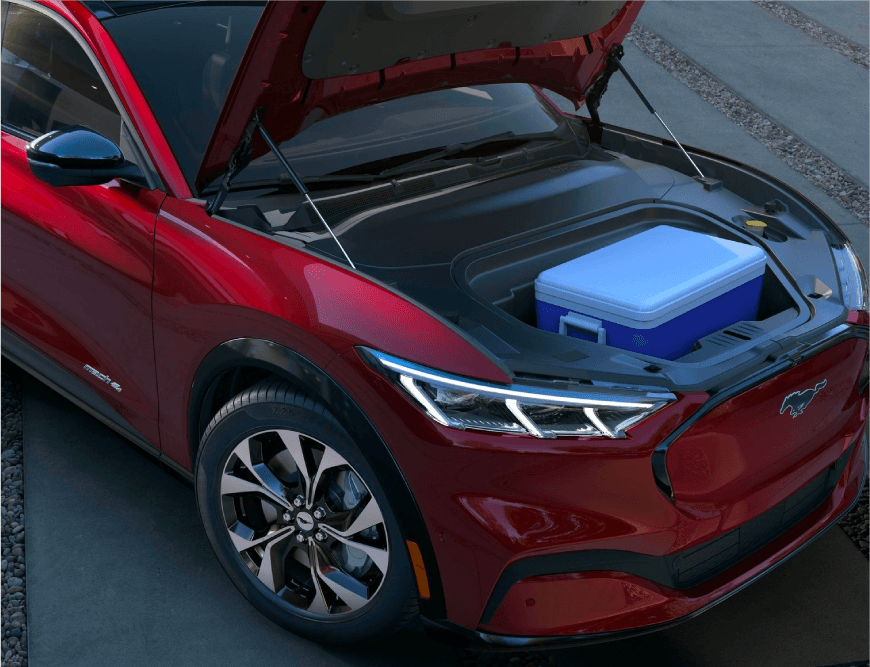 So. Much. Space. The Mach-E offers ample cargo space, front and back.

The Mach-E is not only fun to drive, it’s also practical for driving year-round and in any weather condition. This model is available in eAWD (all-wheel drive) that delivers improved handling in all weather and road conditions. The Mach-E is also weather-tested against freezing temperatures, so you know your vehicle will always be ready for the road. The Mach-E is practical inside, too. Equipped with spacious seating and rear-seat fold-down capability, you’ll be able to maximize cargo space for all of your needs. Storage is available not only in the trunk but also under the hood, its storage space comparable to fitting smaller luggage pieces inside.

The Mustang Mach-E is available in 4 different model options: Select, Premium, California RT.1 Edition and GT. These models will be available for delivery between late 2020 into 2021. Here are some key differences between each model:

The Choice is Yours: 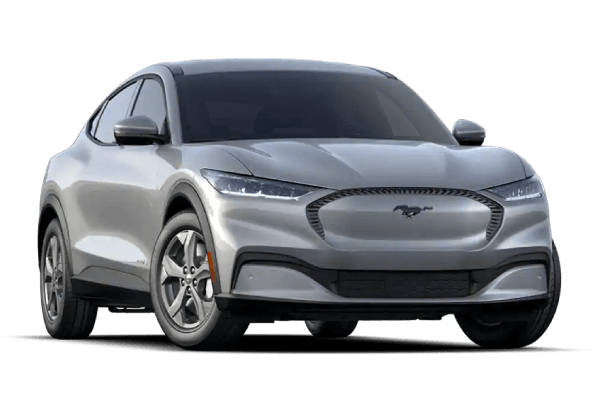 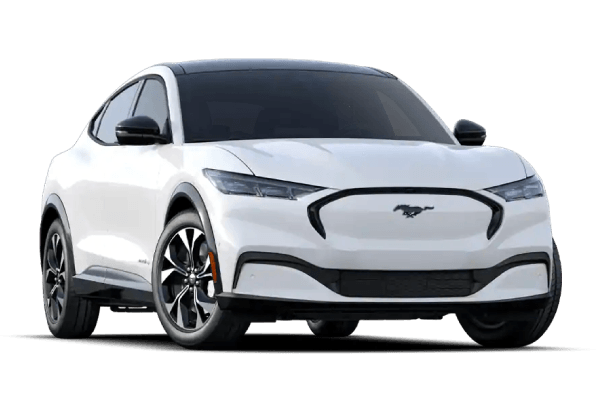 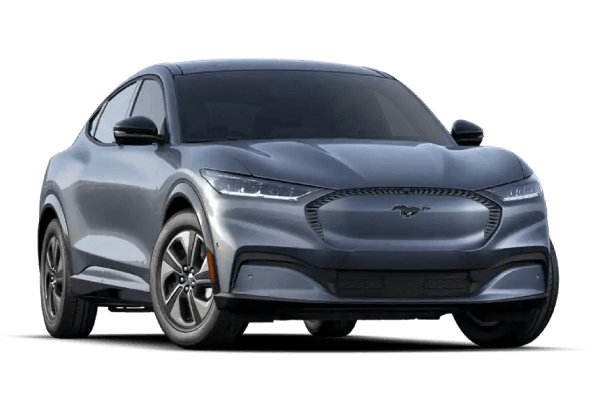 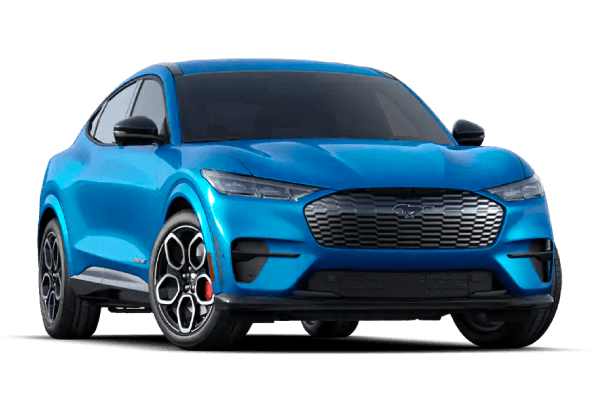 To learn more about the 2021 Mustang Mach-E and to view frequently asked questions, click here. You can learn more about battery type and usage, warranty coverage and more.So, do you think that the 2021 Mustang Mach-E is for you? If so, contact us, to receive updates and reserve your Mach-E. Bayfield Ford is your premier destination for the latest in Mustang Mach-E news and vehicle availability information. Proudly serving the Barrie, Orillia, Oro Medonte and other communities within the GTA, the Bayfield Ford team will have you ready to hit the road in the first Mach-E edition.